Coming in at 22-foot in length, the Moomba Craz falls right inside the sweet spot in terms of size for most families. This mid-sized wakeboat screams traditional styling with extremely high-performance. The perfect fit for Western Michigan families on medium-sized lakes with medium-sized crews

The Moomba Craz comfortably seats 10-12 of your family members and friends. Although, it's important to note that the Craz has a maximum legal seating capacity of up to 16 passengers. Have a comfortable Summer day out on the water, or load the boat up with the maximum legal capacity and create massive wakes and waves for your crew! Your boat, your choice.

Combine the Craz’s high-performance hull, Flow Surf System, and 3000lbs of standard ballast and rest assured you will have the ability to kick out pro-level wakes and waves. Not ready for pro-level? No worries, the Craz can easily be tamed for beginners with Moomba’s patented Autowake System. While the Craz may not be the right choice for the hardcore course slalom skier, it's important to note that the Craz is one of Moomba’s leading crossover models in which Moomba currently produces. No doubt, the Craz creates respectable recreational ski wakes. 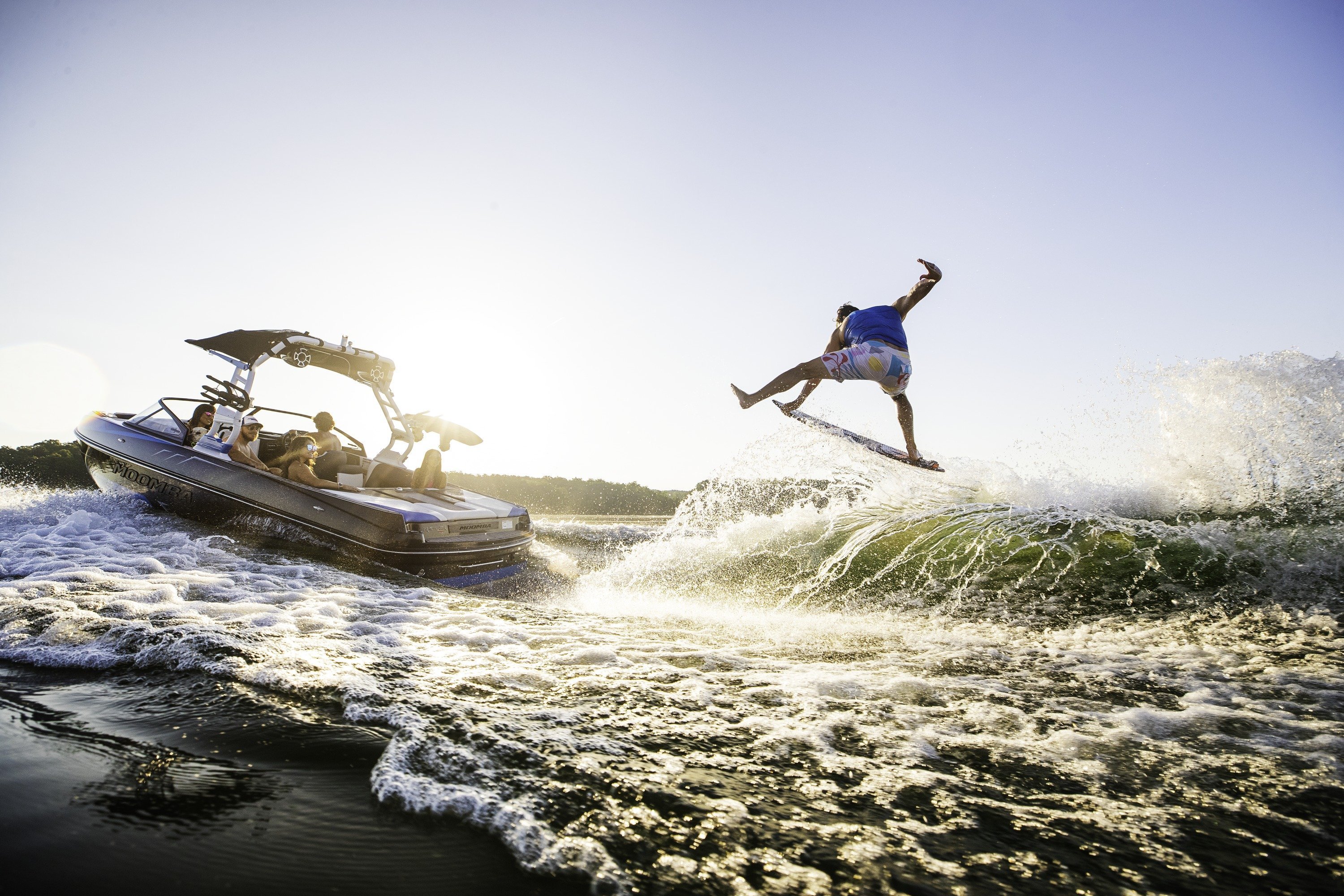 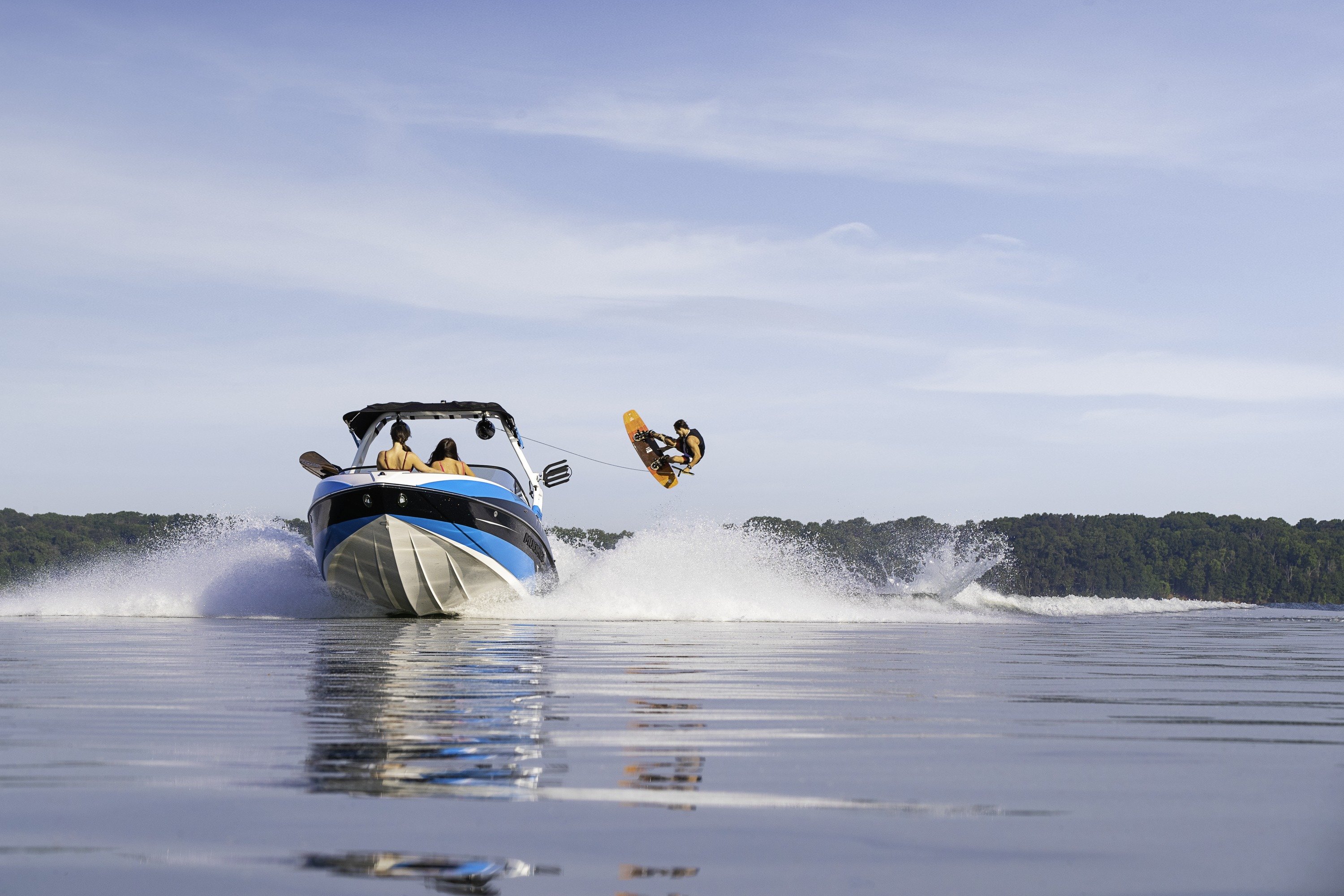 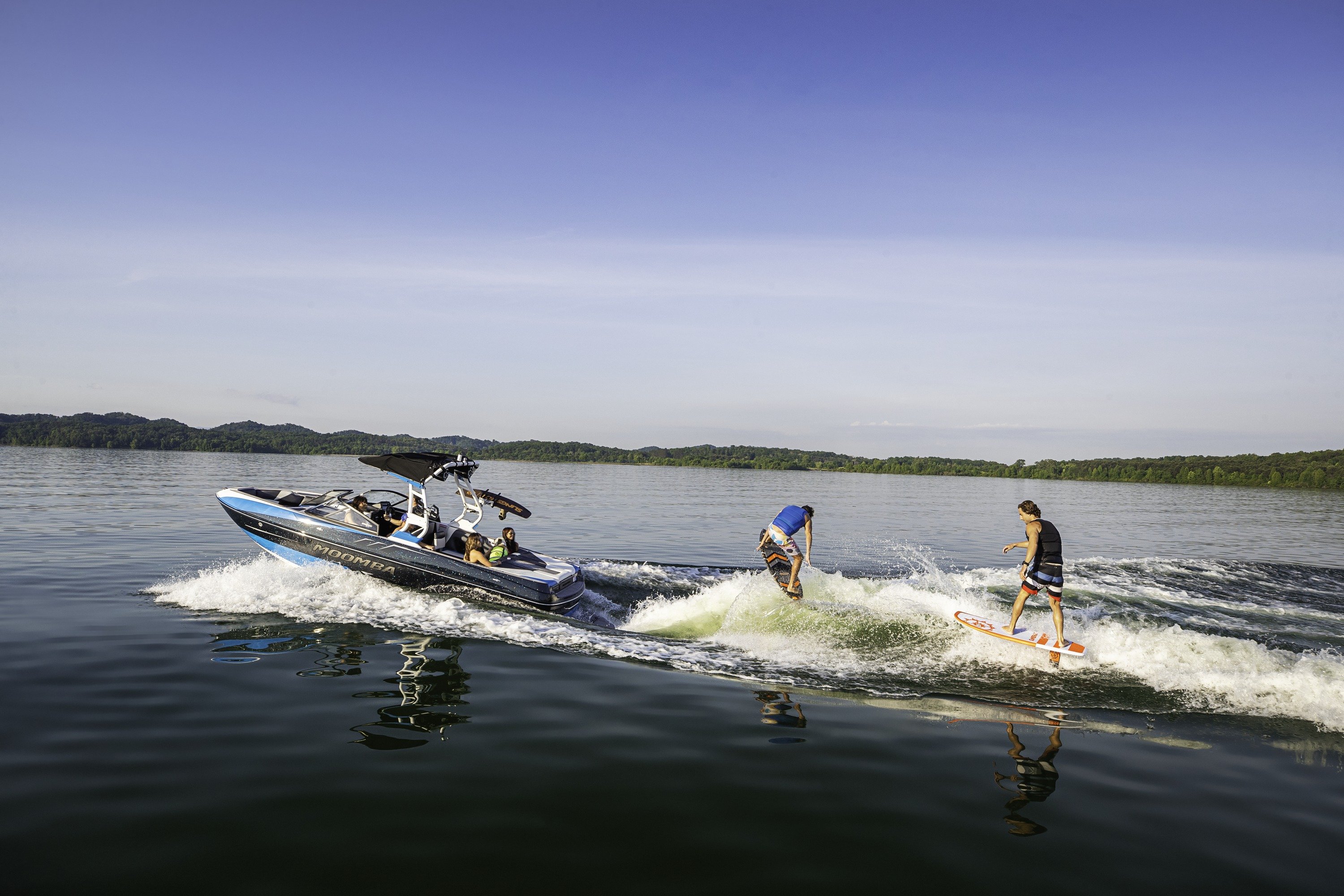 For the 2020 model year, the Raptor 6.2L 400 engine was engineered with a 1.76.1 transmission gear ratio. This new gear reduction allows for larger wake props, lower RPM’s, less engine noise, and a more efficient fuel economy. The Raptor 6.2L engine has major torque and has been engineered to perform exceptionally well at 2,500 to 3,500 RPM’s where today’s water sport applications need it most. On the other end of the spectrum, the boat handles like a high-end sports car when wakeboarding or cruising across the lake with larger crews and ballast weight. 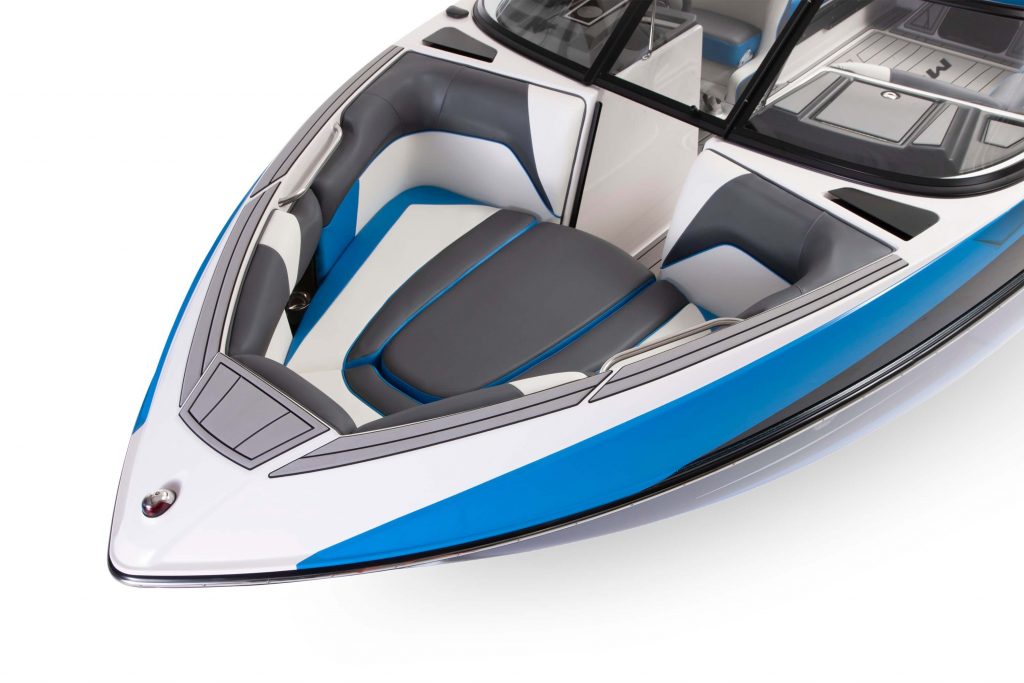 Where all the magic happens, the captain's chair! Newly redesigned for the 2020 model year, the captain’s chair provides maximum comfort and visibility. The redesign allows the driver to comfortably turn towards the port side of the boat to talk with the crew or the rider. Also, flip up the bolster for complete visibility when surfing, wakeboarding, or skiing. 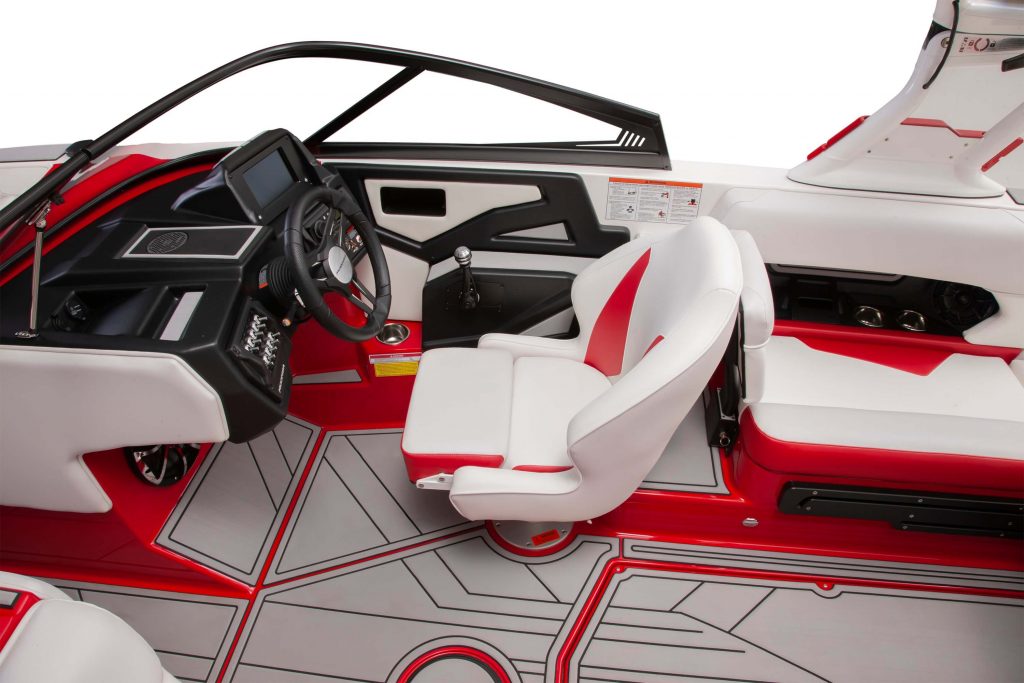 Sundeck Walk Across With Non-Skid

Moving to the rear of the Moomba Craz, you have the standard Sundeck Walk Across With Non-Skid Flooring which provides a high-end look, but also protects your vinyl cushions when boarding and unboarding the boat. The Sundeck Walk Across starts from the back of the sun pad and travels to the step into the boat and even has a step pad on the rear sliding bench seat. 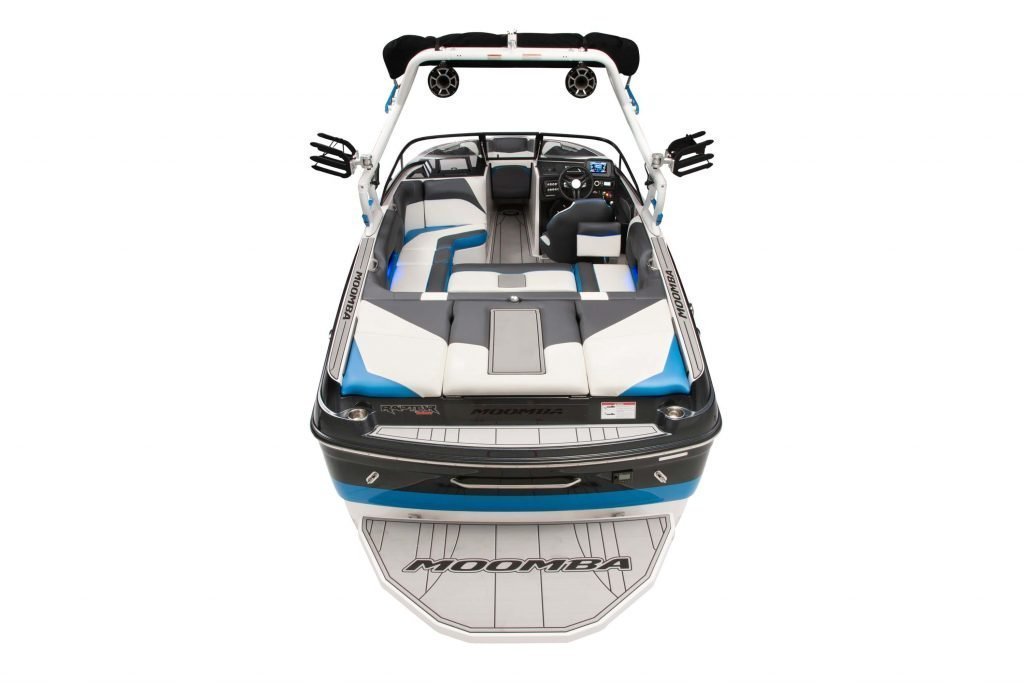 Sick of observing your crew shred behind the boat with a sore neck?  Don't worry, Moomba has you covered with the now-standard seatback kit behind the driver's seat. Looking for more seating with exceptional rear views? Option for the seatback kit on the rear sliding bench seat for ultimate neck protection!

In addition to the USB charging ports for your electronics, Moomba has now implemented spaceship-like technology to the 2020 Moomba Craz. The new wireless charging pad is located on the helm of the wake boat and allows for a quick easy charge. 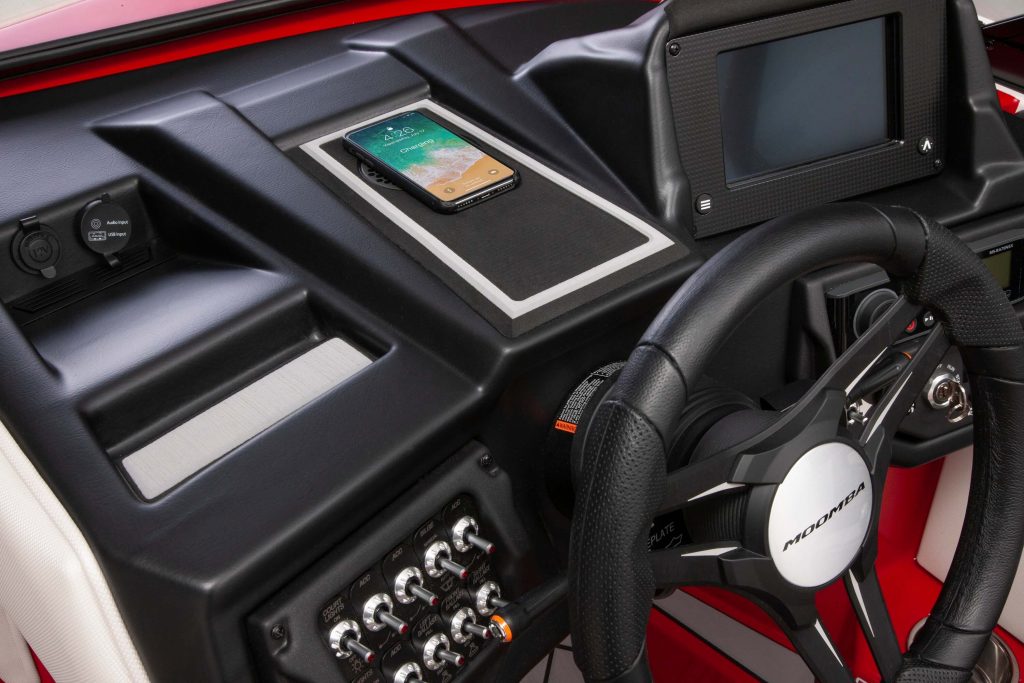 Moomba Boats have been established to provide the consumer with all the standard features that are wanted and needed in a wake boat without forcing add-on options that secretly increase the final price. If for some reason your new to Moomba Boats or you just haven't checked-in in a while, here's a list of the tried and true features. 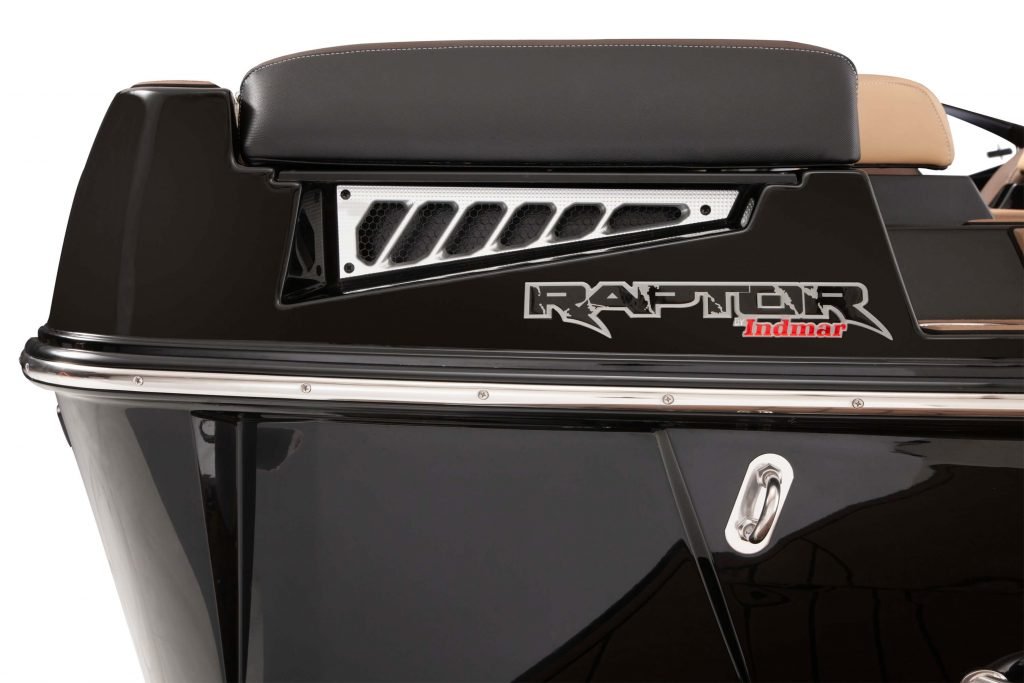 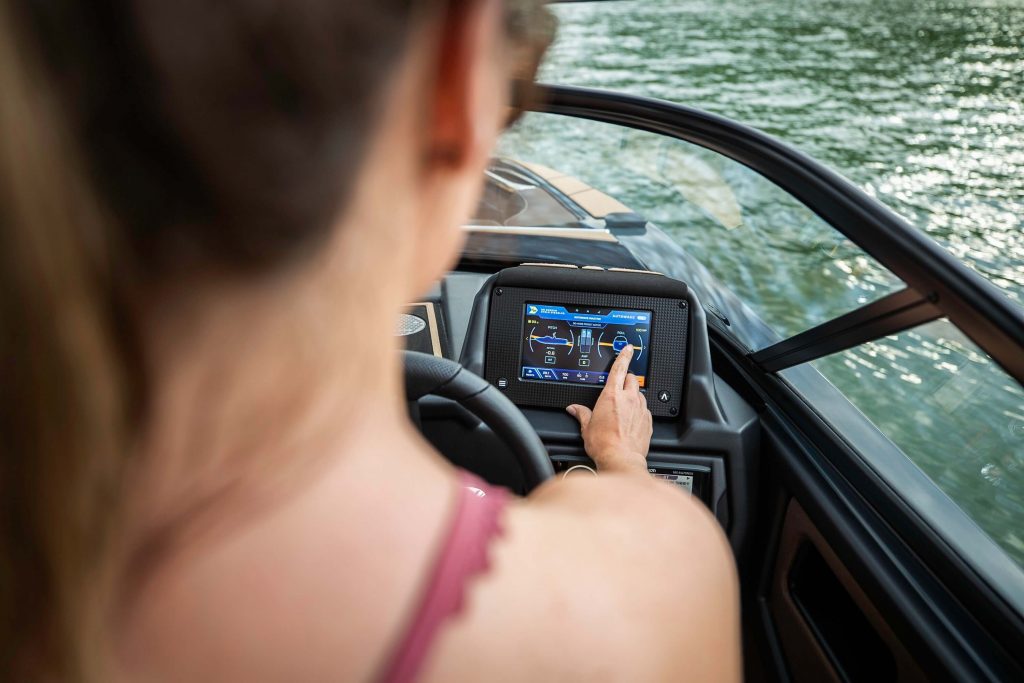 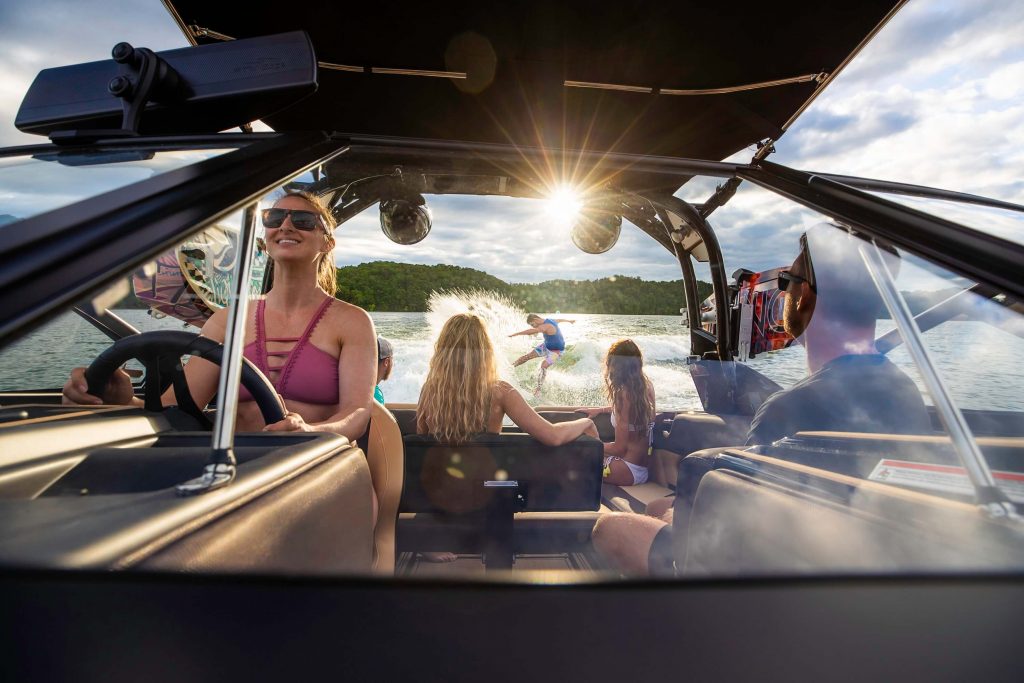 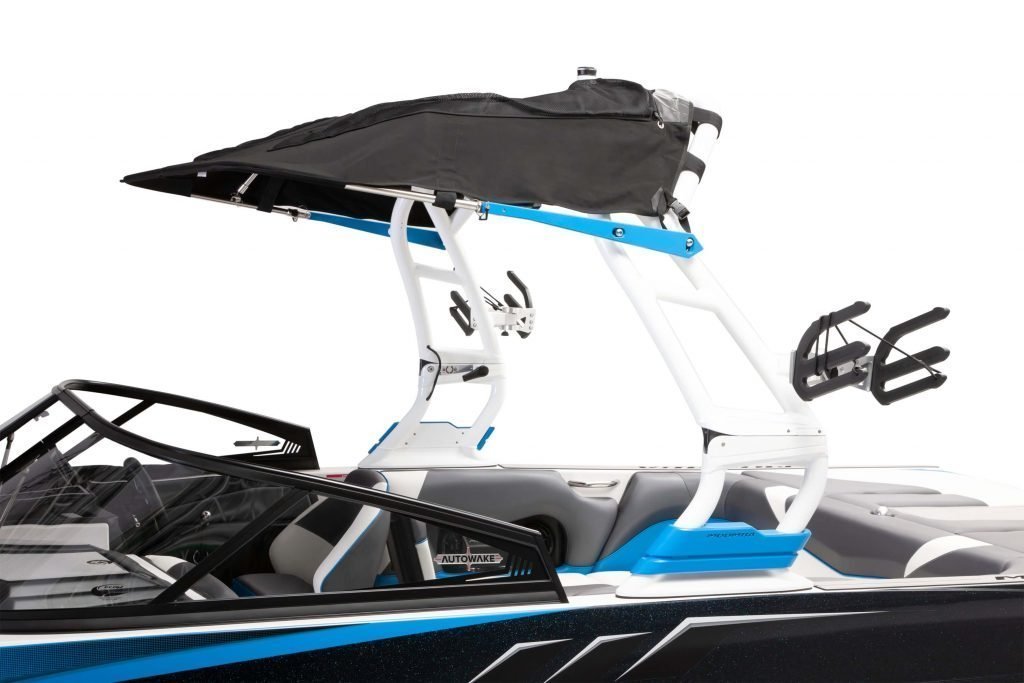 Options For The Family That Needs It All

While there is a long list of standard features, there are a few items you're going to want to consider to make your new boat truly your own! The most commonly added item is Moomba’s Flow 2.0 or 3.0 surf system which helps shape fully customizable surf wakes and provides surfers with long clean waves. Combine that with Moombas patented Auto Wake system and you’ll have replicable and tameable surf and wakeboard wakes every time. Other popular options include... 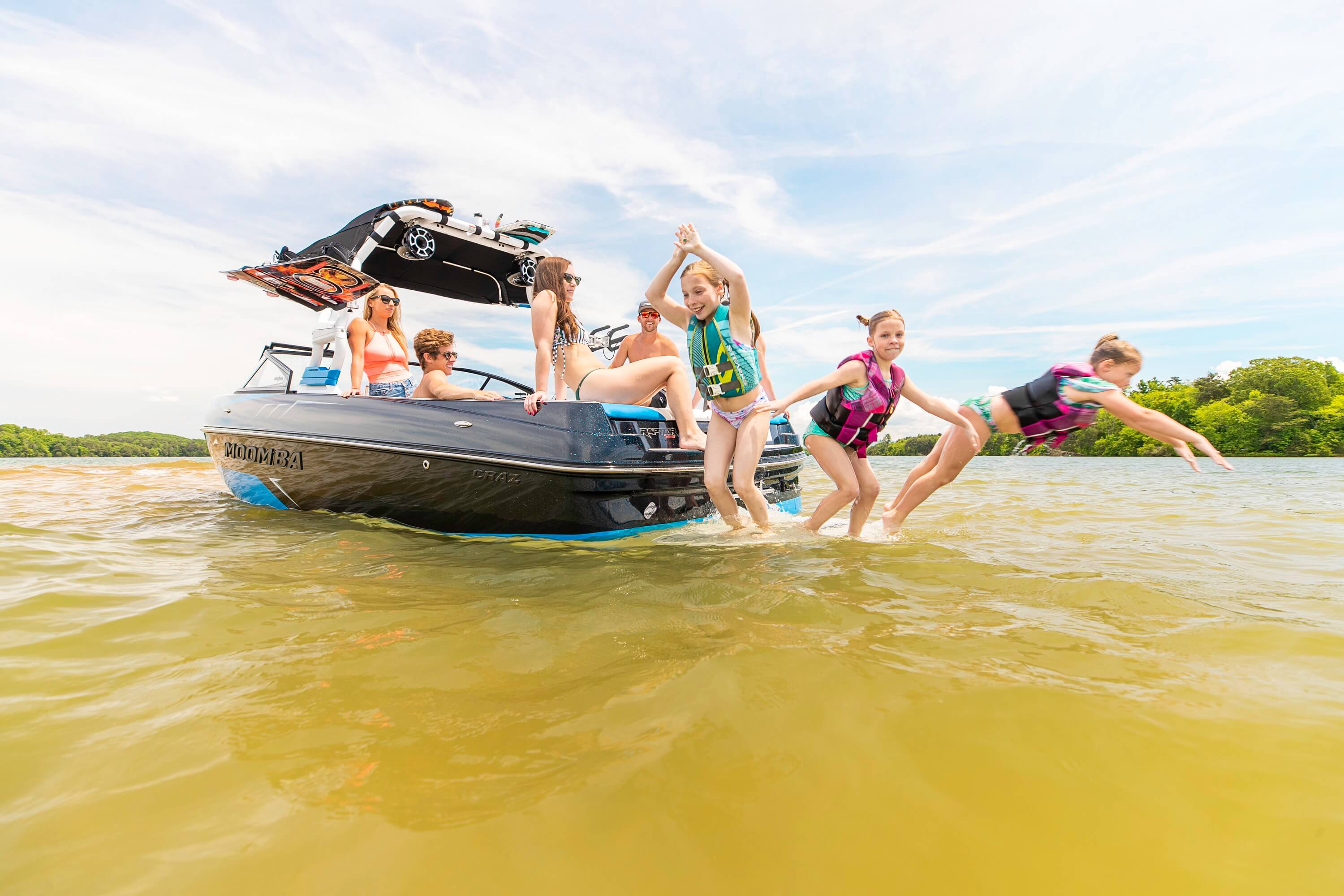 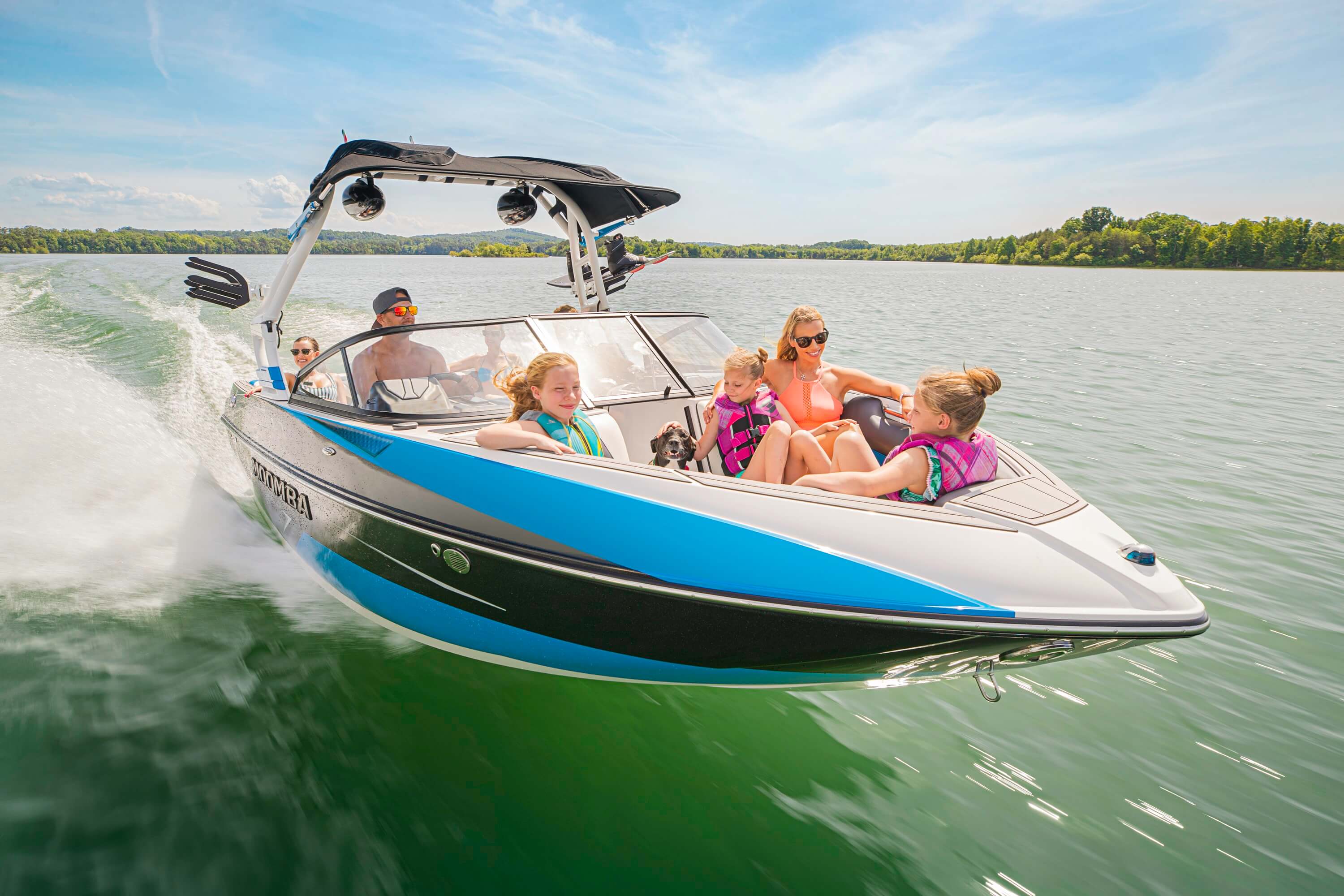 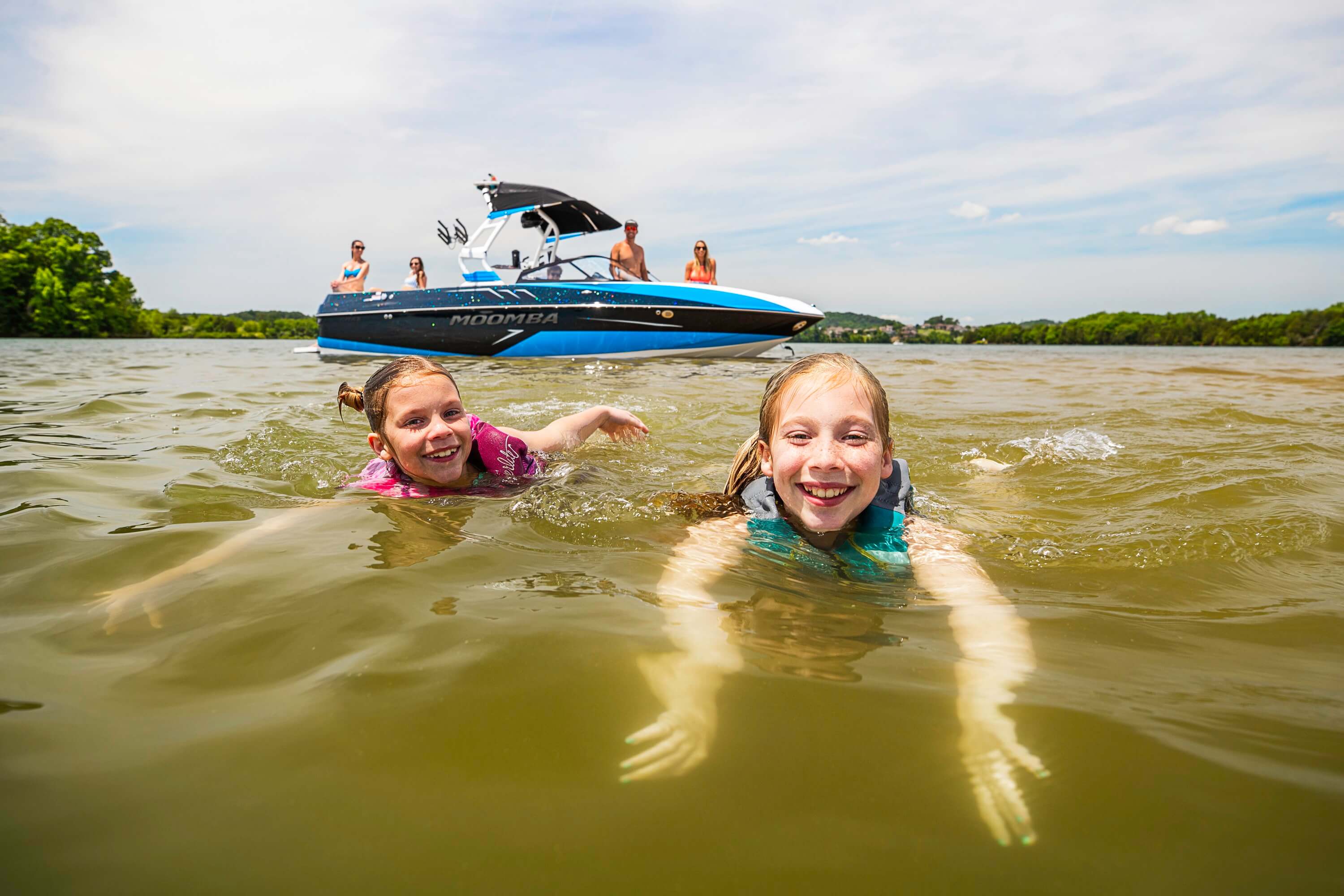 The 2020 Moomba Craz has a dry weight of 5400lbs and is towed on a custom-built tandem axle Boatmate trailer. Yes, this seems like a large load, but the Craz is still an easy tow. Most medium-sized SUV’s will still pull the Craz with extra power in the tank!The automotive industry has done an exceptional job increasing the towing ability as the marine industry manufactures longer, deeper, and heavier wake boats. Therefore, there is no need to worry about towing the Moomba Craz on those long trips with the family.

Another great feature in terms of specifications is the ability to stow the 2020 Moomba Craz inside of a 9' garage door.  Whether you're storing it for the night, week, or cold months, the Moomba Craz fits under many garage and pole barn doors!

Moomba is highly focused on customer satisfaction and much less worried about market share. They have won 14 consecutive CSI awards and consistently rank in the top 5 across all brands and industries. They do this by using reliable and durable parts and pieces and by being focused on consistent quality. Hopefully you won’t ever need it, but they back the product up with an industry-leading 5-year limited lifetime warranty too. That’s a limited lifetime hull warranty and a 5-year warranty on parts, components, and the engine.

Why Your Family Should Purchase A Moomba

Moomba has been the leader in the value performance industry for a long time. Premier Motorsports is happy to have been partnered with Moomba for over 20 years and to be able to offer and provide our customers with their product. For more information on the 2020 Moomba Craz or to set up a time to meet with one of our Moomba sales consultants and go through the boat in person give us a call or submit your information to us below and we will be in contact with you very soon!

2020 Moomba Craz Base MSRP And Specs

Thanks for your message! One of our professional sales consultants will be in touch with you very soon.

I was born into and raised in the boating community and thoroughly enjoy my time on the water with friends and family. Because of this, I love helping other families find their perfect boat and seeing them enjoying time together on the water. I understand purchasing a new boat is a large investment for most families. My knowledge of the industry helps ensure that the process is fun and easy and that customers end up in the correct product. I take pride in being low pressure, extremely responsive and customer service oriented and am committed to being customer focused from day one.

Complete with videos, articles, customer testimonials, and brochure downloads, our Customer Corner is all about you!